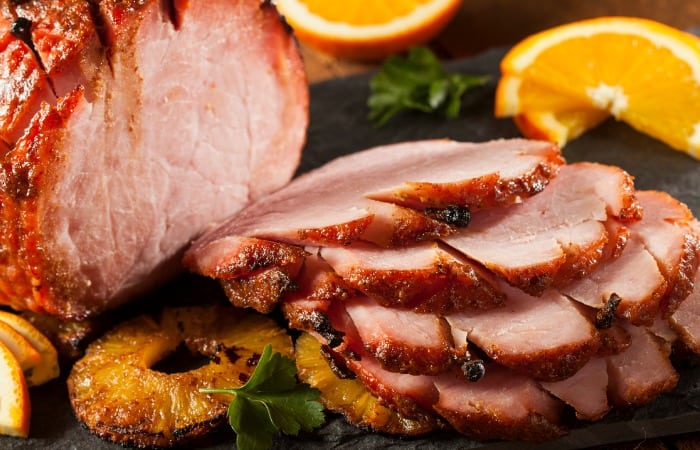 Trust me, just follow these steps for How to Make a Cheap Ham Taste Amazing and your guests will be totally none-the-wiser that you didn’t spend a ton on that awesome spiral-sliced.

How to Make a Cheap Ham Taste Amazing

This is the perfect ham, every time. What kind of ham, you ask? Well, it just doesn’t matter.

You can buy a canned ham, whole ham, bone-in, or spiral sliced–whatever kind your budget allows.

Once you’ve prepared your ham according to this recipe, it will be the best ham you’ve ever eaten, every single time.

And the best part is, it’s easy and there’s no way you can mess this up.

How Do You Cook a Pre-Cooked Ham?

There’s nothing special about a pre-cooked ham vs. a un-cooked ham, other than you shouldn’t sneak a bite of the un-cooked one before you pop it in the oven.

A pre-cooked ham is typically frozen or refrigerated and will take substantially less longer to cook than an un-cooked one, because you’re just warming up the pre-cooked one, not trying to cook it through.

This recipe is written for a pre-cooked ham. If you prefer to start with an un-cooked ham, just adjust cooking time and temperatures according to the package directions.

You’ll still end up with the perfect ham that tastes amazing.

What is the Best Ham for Thanksgiving (or Easter or any holiday?)

The best ham for Thanksgiving, Christmas or any holiday is a baked ham. The meat is sweet and juicy, and the skin is crispy.

Typically supermarkets sell pre-cooked hams with a packet of glaze in the deli section of the grocery store.

And I would say, by and large, that’s the ham most people serve at their Thanksgiving table.

Other options include spiral-sliced honey baked ham (which is delicious, but many people find the hone glaze too sweet), bone in natural or maple roasted leg of pork (belly) also known as pork shoulder.

It all depends on your cut of meat preference.

How Much Does Ham Cost?

Typical prices vary widely by region, quality, and time of year. In the US, a typical ham might cost around $5-$6/lb in May-October and closer to $9-$10/lb from November-April.

Again, strongly dependent on region, quality, and time of year.

One outlier is a holiday ham or smoked ham on sale for some special event such as Thanksgiving, Easter, or Christmas which can go down to less than $1/lb even when bought frozen.

At this low price for a large meat item you’re not going to get the highest quality “slicing grade” meat, but it’s often close enough for people who just want something nice on the table without doing too much work prepping things themselves.

That’s where this recipe comes in, changing that holiday-sale ham into a dream.

What Size Ham Do I Need?

The general rule of thumb in my house is that you get an 8-10 lb ham for any gathering larger than 5 people.

But, you’re wanting to know more than just MY preference, right?! Here’s the general rule of thumb:

Do You Have to Have Ham for Thanksgiving?

No, you really don’t. Ham has gained prominence as the centerpiece dish during Thanksgiving and Christmas celebrations thanks its ability to break up all those heavy starches or mashed potatoes – not to mention it’s an easy dish for the host who doesn’t have too much time!

Ham also goes well as a holiday escape from turkey which can be dry or bland – and lots of people have strong feelings about.

But that doesn’t mean you have to have ham. If your budget doesn’t account for ham, don’t sweat it. Do what’s right for you.

What Are Some Ham Variations You Can Make?

With a few tweaks of the glaze, you can make a lot of

What Do You Serve with Ham for a Holiday Meal?

The great news is that these are all SUPER inexpensive side dishes for Thanksgiving or Christmas dinner. So you can make them with the ham without breaking the bank.

And you can always make a cheap turkey taste amazing, if you want to go with ham and turkey for your dinner.

If you want to accomplish a whole Thanksgiving dinner on a budget – best to start with a full shopping list.

This is the easiest way to make a cheap ham taste amazing. With these simple tricks, you'll never have dry, tired ham for the holidays again!

If you really want to dress the ham up, top with pineapple rings and place cherries in the center of the pineapple rings, about 15 minutes before baking is complete. The secret to this recipe is the Beer. The beer will prevent the ham tasting too salty, and will ensure a moist and tender dish.

If you prefer to start with an un-cooked ham, just adjust cooking time and temperatures according to the package directions. You'll still end up with the perfect ham that tastes amazing.