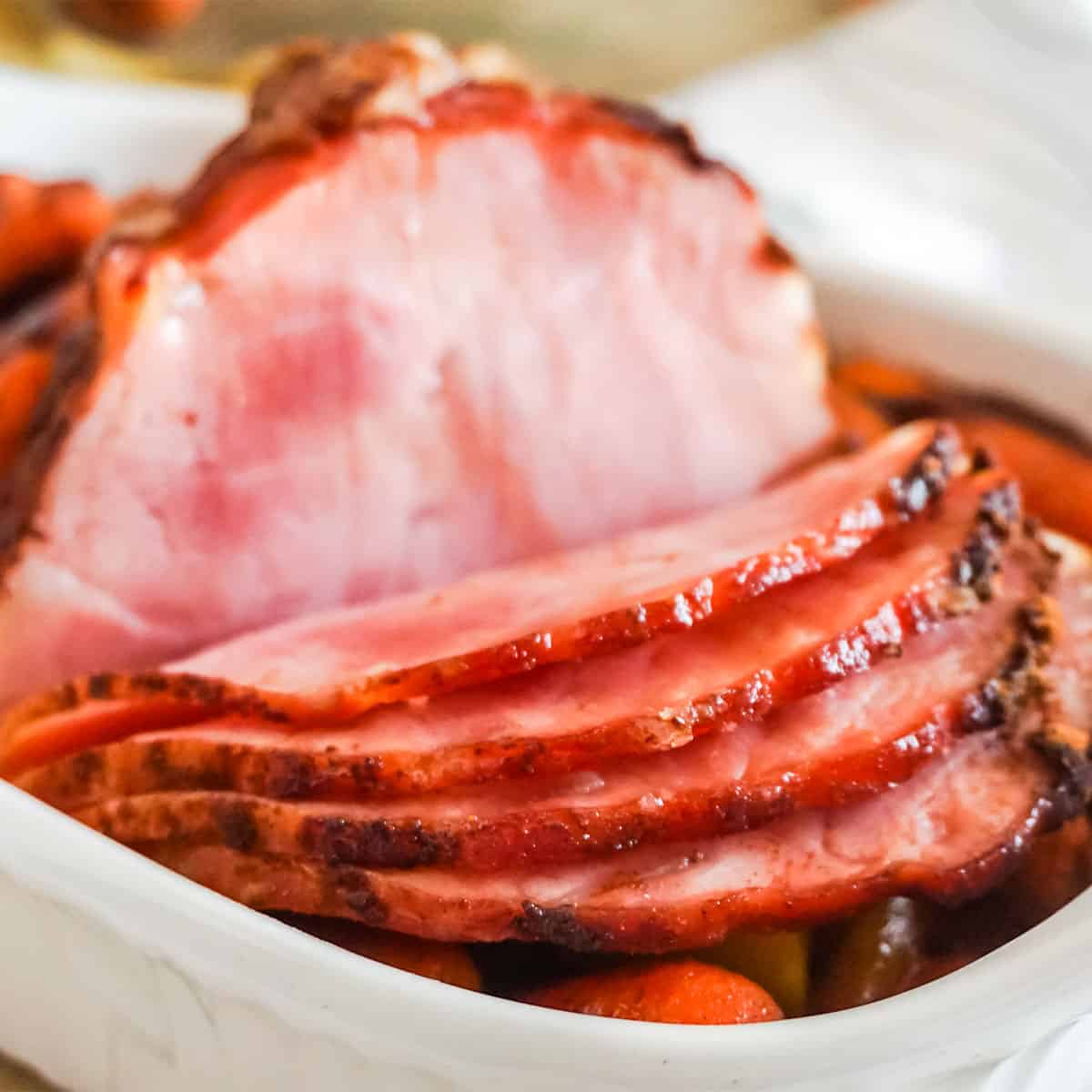 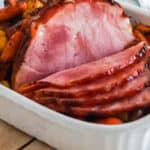 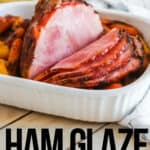 If you want to know the secret to make an easy ham glaze that will make your taste buds sing, then you’re in for an exciting treat. It’s the best secret.

We’ve all been there – prices are climbing insanely on the cost of meats and the holidays always seem to come at the worst time.

You cut corners by buying cheap ham instead of expensive ham because you think it’s going to be just you, the spouse, and the kids this year.

But then you find out that the whole family plans to show up on your doorstep – and the store is out of ham now. NOOOO!

Just kidding – you don’t need to panic at all.

With this easy recipe for an easy ham glaze – no one will know you were cutting corners with that cheap ham!

This is seriously one of my favorite recipes, and I hope it becomes one of yours too!

Not only will this easy glaze save you money (because you’ll never have to buy a super expensive ham again) but it tastes AMAZING and with so few ingredients, it’s nuts.

Before this recipe, I honestly wasn’t a big fan of ham, but I’ve found that when it’s combined with the right glaze recipe, it can be downright delicious.

So, whether you’re making ham for Easter, Christmas or Thanksgiving, this easy-to-make recipe is great for feeding your family or hosting guests.

It’s also perfect if you’re looking to save money on the holiday season.

When Should I Add the Ham Glaze to the Ham?

Some recipes call for the glaze to be applied during the last few minutes of cooking a baked ham so that it will char before the ham cools.

But, I feel like that’s only applicable if you’re working with an uncooked ham.

Most of the spiral cut hams you buy in the grocery stores are pre-cooked, though, and as a result, they don’t have to be cooked for hours in the oven – just a little while to get the meat hot and ready for the table.

So, in order to get the optimal flavor from your ham, I recommend that you brush on a thick layer of this ham glaze recipe prior to baking.

This will seal the surface and keep it from drying out or burning through.

Can You Glaze a Ham the Day Before?

You CAN, but should you? No, not really. Generally, it’s best to only glaze the ham about an hour before cooking.

That way the glaze doesn’t have time to soak into the ham and no longer be a glaze.

But! You can MAKE the glaze the day before, placing it in the fridge overnight. When you’re about ready to heat the ham in the oven, just glaze it up!

How Do You Make a Brown Sugar Glaze for Ham?

How Do You Make a Pineapple Glaze for Ham?

Easy! Instead of using peaches as I detailed in the below recipe, you can swap that with crushed pineapple. The pineapple will be a much stronger flavor, though, than the peaches.

So, if you choose to use pineapple, don’t be surprised if you taste the pineapple when enjoying your ham.

You can also just add about 1/4 cup of pineapple juice to the bottom of your baking pan, for a less-strong flavor if you still want a little pineapple sweetness without a pineapple overtone in every bite.

How Do You Make a Maple Glaze for Ham?

One of the most popular ham glaze recipes is a maple ham glaze. This is an easy one to do.

You can add 1/4 cup of maple syrup to the recipe below for a stronger maple flavor, but this isn’t strictly required.

The brown sugar in the recipe will create the rich maple flavor without being overpowering. S

o, you have options to let the glaze be on its own or add the syrup for a more decidedly stronger flavor.

How Do You Make a Honey Ham Glaze?

Some cooks also like to dip their ham in honey before cooking (but who has that much freaking honey to dip the whole thing?!).

If you want that added sweet touch, you can just brush about 1/2 cup of honey over the ham using a silicone brush.

You can brush the honey on after you add the glaze recipe below or mix the honey into the glaze.

How Do You Make a Mustard Ham Glaze?

For a different flavor you can make the ham really pop by adding 1/4 cup mustard to the recipe below.

There’s a completely different flavor that’s just waiting for you when you add that mustard, though, so be ready! LOL!

You can use regular yellow mustard or dijon mustard. It all depends on the ham experience you’re looking for.

What Spices Do You Use to Make a Ham Glaze?

For a more spicy-experience (just with spices, not with like jalapenos or anything), you can even add spices like ginger, nutmeg, or allspice or even cloves (whole cloves or ground cloves, this is not a science).

Those spices will add tangy flavors but you may want to use them sparingly because they can easily overwhelm the ham’s natural flavor.

How Do You Make a Glazed Ham Steak?

This idea is not so different from a glazed spiral-cut ham. The biggest difference is that the typical ham steak (the thick, single slice of ham) isn’t necessarily pre-cooked.

So, you’ll need to follow the directions on the packaging to cook it, if it’s not. So just look out for that.

Once your ham steak is cooked, to glaze the ham steak, use the recipe below and, instead of placing the ham steak into the oven, place it in a pan filled with the glaze.

Over medium-high heat, let the ham sit for 2-3 minutes, then flip it. Once the ham his coated and hot, remove and enjoy!

Tips for Cooking a Glazed Ham

Whether you’re cooking a large spiral-sliced bone-in ham or a ham steak, I know that the idea of cooking your first ham or your 30th ham can be daunting, especially if you’re only cooking it once or twice a year.

So, I gathered my favorite tips for cooking a glazed ham.

What Should You Serve with a Brown Sugar Glazed Ham?

Though the majority of folks go for a stuffing, green bean casserole and the other classic side combinations, there’s always room for less intense sides, too, no matter if you’re cooking for Thanksgiving or Christmas.

Some of my favorite sides for a ham dinner (holiday or not) are:

Ways to Use Ham Leftovers

Regardless how much ham you buy or the number of people you have at your table, there will either be someone picking the meat from the bone or you’ll have a ton leftover.

There’s just no middle-ground. So, assuming you have some leftover ham, you’ll want to DO something with that, am I right?!

Now, on to the delicious brown sugar ham glaze recipe. Be sure to pin it to your favorite Thanksgiving or Christmas recipes board on Pinterest so you can find it again fast when the time comes around again!

Fast and absolutely delicious, this easy ham glaze recipe is a fantastic way to dress-up a cheap ham!