It’s that time of year again. It’s time to start breaking-out the creepy. Seriously, I know it seems a little early, but you have to brush-off the cobwebs–get the old cauldron cleaned-out. And make some Fake Edible Blood so that the kids can be appropriately grossed-out when they have a big-ole chompy-chomp of Murdered Cupcakes. 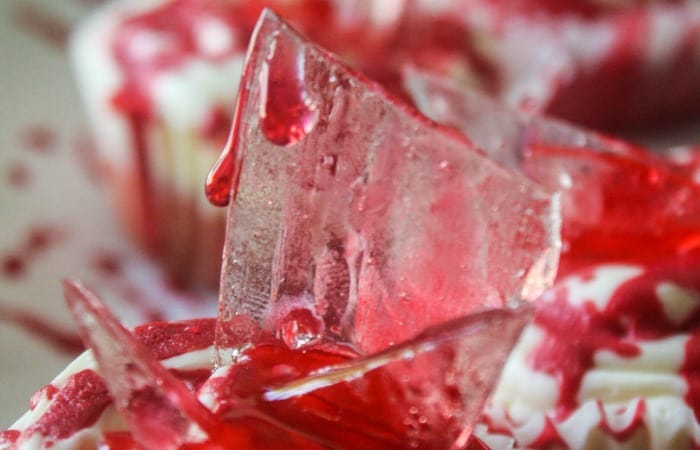 So, this is such a simple recipe that my son actually made it one day–and got it all over himself in the process. So, maybe not so simple, because the Fake Edible Blood kinda looks like real blood and then you’re hovering over your (then) 12 year old wondering how they sliced all their fingers open. Which he hadn’t. It was just the fake blood. But, really. That moment. Almost as good as the time he drew a fake Harry Potter scar on his head.

Literally 2 seconds from taking him to the emergency room and we realize the huge injury (what now looks like a epic bruise on his forehead that he doesn’t remember how he got) is just marker. The same with the Fake Edible Blood. All over his hands. So much of it that I was seriously concerned he’d die of blood loss.

Ok. I rescind my prior statement. Maybe this isn’t the easiest recipe. Heh.

What You Need to Make Fake Edible Blood

But, if you’re accomplished, you can totally make this Fake Edible Blood and use it to top pretty much any regular dessert–instantly turning it into a crazy concoction perfect for Halloween. Me, I’m putting it all over Murdered Cupcakes and the Candy Glass that killed ’em. Best. Idea. Ever.

Kind of like pinning this so you can find it right before your Halloween party. Because you know you’re going to be standing there, 10 minutes out from guests showing-up at your door with a handful of plain cupcakes that you REALLY want to be creepier. Level-up, baby. Level up. Heh.

Time to make some Fake Edible Blood so that the kids can be appropriately grossed-out when they have a big-ole chompy-chomp of Murdered Cupcakes.

Try these 20 Cheap and Easy Canned Ham Recipes! You will be amazed at how tasty they are. Even a cheap ham can be made ... Read more

Want to use that leftover ham or just try something different with your ham? Make this no-fail Ham and Ranch Salad. There are only five ... Read more