(Inside: You ready for the Star Wars Vacation of your lifetime? I am. And I’m ready to deal with the crowds, too with these 4 Hacks for Dealing with Crowds at Star Wars: Galaxy’s Edge. You won’t be sorry.)

When you’re trying to avoid the crowds at the theme park and have space to breathe, it can get somewhat tricky and frustrating.

Add to that the undoubtably huge excitement that is expected for the opening of Star Wars: Galaxy’s edge at Disney World, well, the crowds promise to be even more crazy-cakes.

So, I researched these 4 Hacks for Dealing with Crowds at Star Wars: Galaxy’s Edge.

No longer will you have to wait hours in lines and feel like you’re walking on top of other people (unless that’s your thing, then have at it, hoss).

All you have to do is think smarter and use these 4 Hacks for Dealing with Crowds at Star Wars: Galaxy’s Edge., and you’ll be the first Stormtrooper over the hill and into the battle!

Er…is that a good thing? 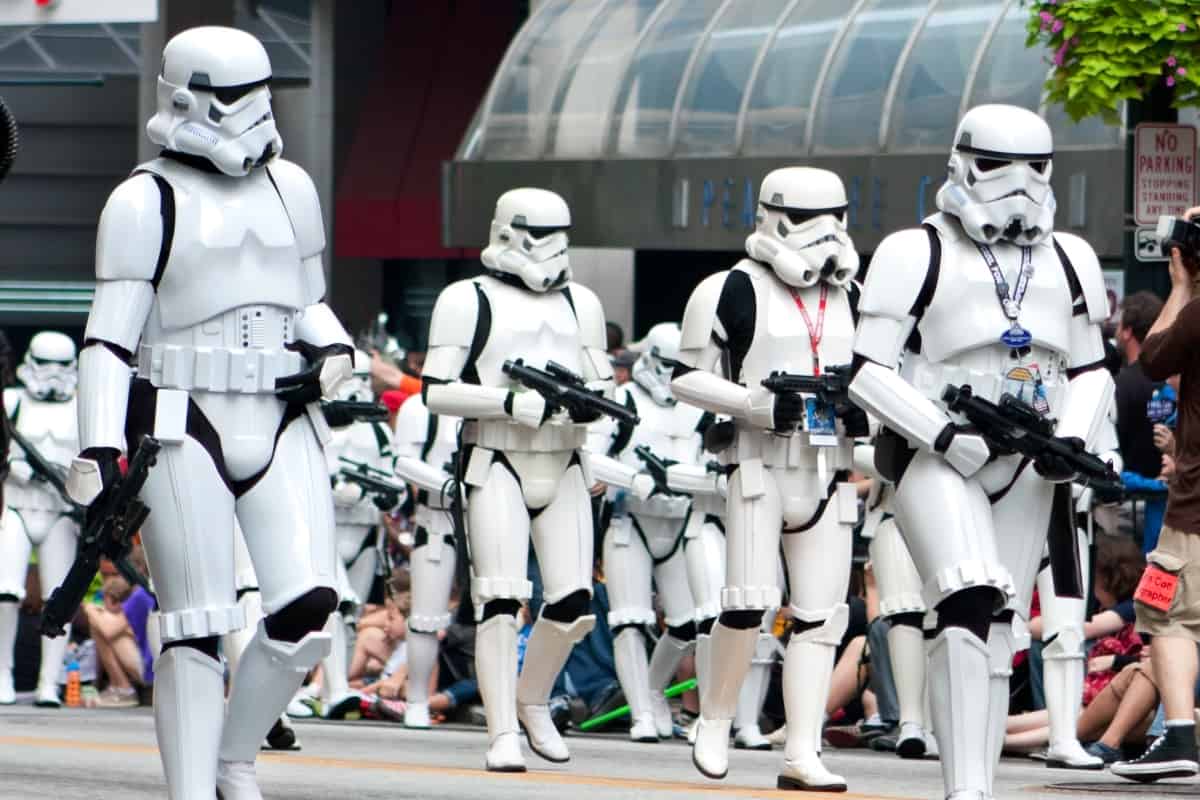 4 Hacks for Dealing with Crowds at Star Wars: Galaxy’s Edge

When you are a registered guest at one of the Disneyland Resort hotels, there is a huge perk to help when you’re dealing with crowds at Star Wars: Galaxy’s Edge.

They are called Magic Hours, and they allow you to enter the park earlier or stay later after everyone else is going home.

These special hours are only available on certain days, but if you want to avoid the crowds, this is the way to go.

There are a lot fewer people around you when you take advantage of this option and, therefore, less frustration on your family vacation.

I recommend, highly, booking the full-immersion experience for Star Wars: Galaxy’s Edge by staying at the hotel–erhm, starship–attached to the park.

That way you get the Magic Hours–plus all the fun of being inside the experience from start to finish.

If you’re smart, you’ll take advantage of the fast passes–one of the biggest tools to help with dealing with crowds at Star Wars: Galaxy’s Edge.

Be strategic and plan to grab your fast passes according to the rest of your schedule.

You can snag a fast pass before hitting the cantina for lunch, and show up to the Millennium Falcon just in time to go to the front of the line.

If you plan ahead, this is a fantastic option when you want to shy away from large groups.

Not only will you go to the front of the line, but you’ll also have others wishing they were as smart as you and grabbed a fast pass.

I mean, it only takes two seconds–so it’s worth it. 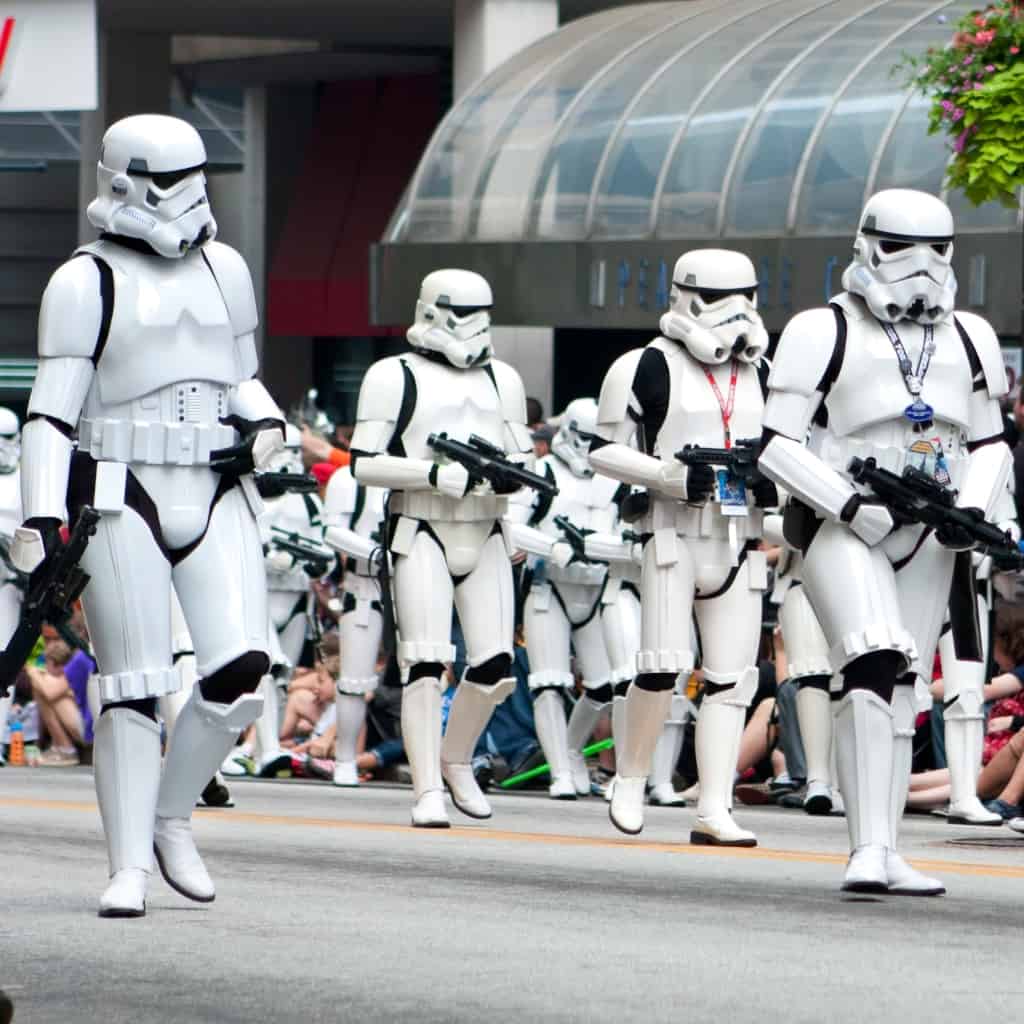 Don’t be the person standing in the middle of Baatu with their head in a map–you’ll look like a tourist, which is almost as bad as not keeping your eyes down…seriously, this is Star Wars 101, here.

Trying to find out where you are and where you’re going while dodging Stormtroopers and aliens…It’s too much to deal with.

Besides, who wants to spend half their vacation trying to figure things out rather than doing.

Study the map the morning before venturing out–or during lunch breaks.

When you have a plan about where you’re going to go and in what order, it will be a lot easier to get around and you won’t be causing traffic jams in the middle of the dirt streets.

The early bird gets the worm

If you want to hit all the major rides before the crowds rush in, you will have to get to Star Wars: Galaxy’s Edge early.

As in, when the park opens.

There won’t be anyone in the lines yet, and you’ll be able to walk right through and onto the rides.

It’s the perfect idea when you want to ride the rides first and then enjoy shopping and strolling for the rest of the day!

Avoiding crowds at Star Wars: Galaxy’s Edge won’t be as impossible as you might think.

In fact, if you’re strategic and think ahead, you’re bound to miss all the large groups of Stormtroopers and aliens.

One last thing, since the park isn’t open quiiiiiite yet, you should totally pin this, so you can come back to it when you’re actually planning your vacation… 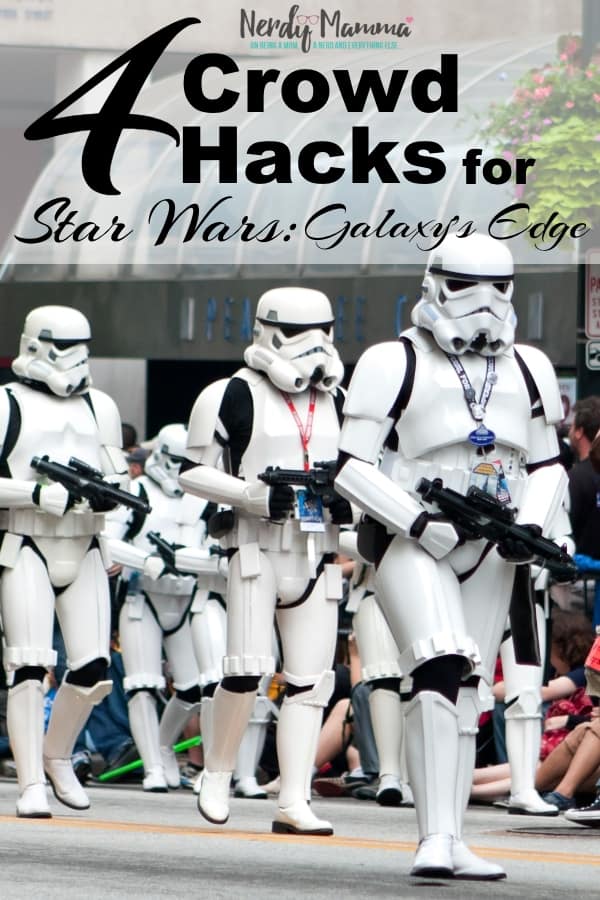