No, really, a swine, four-legged, long-snouted, smelly, PIG! I’m a Texas girl, and no stranger to wildlife or farm animals. And, I’ve driven lots of miles across the great state of Texas (and a few other states, too). I’ve dodged deer, dogs, cats, wolves, coyotes, alligators, snakes, possums, armadillos, and any number of other critters on the roads . . . but, I never saw a pig on the road before. 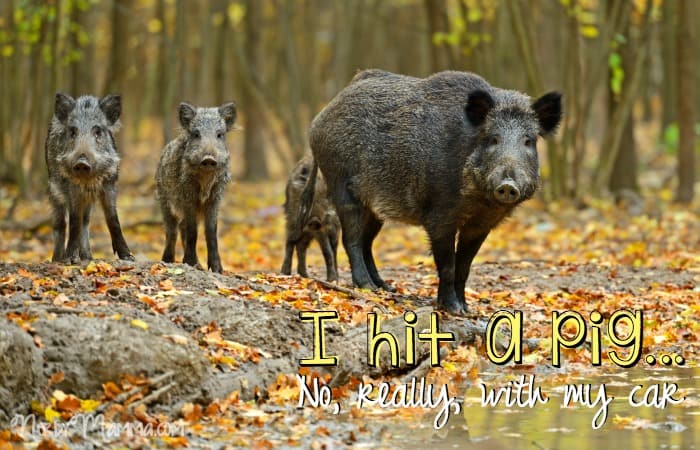 Of course, I know that there are a lot of wild and/or feral pigs out there nowadays. But what are the odds that the first pig I saw on the highway would be the one that I would also have to actually have physical contact with? The thing is that pigs just don’t belong on the roads! I was telling my neighbor about the incident, and I told him that the pig was the size of a baby elephant. He seemed to think that I was exaggerating! (Imagine that!) But, I’m telling you that that pig was BIG! My husband, who is also a Texas man, has been around farm animals all his life, and he says that the pig had to weigh 400 pounds. That’s a lot of bacon!

Hubby and I were headed from Texas to Louisiana, and had just gotten onto Interstate 20, headed east. It was getting late, probably close to 9 pm. The significance of the time is that it was VERY dark. The speed limit out there is 75 mph, and I was taking advantage of that. Of course, there are no street lights out there, and the only lighting was from our headlights and other vehicles’ headlights. Competing with the 18-wheelers on the interstate, I had just passed one of those big rigs, and I was driving in the left lane.

Out of nowhere, there was a pig standing right in front of my Ford Explorer! The pig was solid black, and its surrounding environment was black. Until it was illuminated by my headlights, the pig was invisible. I’m here to tell you that when an object appears about 50 feet in front of an automobile that is travelling 75 miles an hour, there is just not a lot of time to react!

As soon as I saw the pig, I hyper-jumped into survival mode. For me, this means that I become calm as a snow-covered field looks, and everything seems to move in slow motion.  Becoming ultra-aware of my surroundings, I immediately knew that there was a concrete barrier just off the highway on my left, and the pig was in front. Mr. Piggy was travelling from my right to my left, and don’t forget that I had just passed an 18-wheeler that was now only a couple hundred yards behind me in the right lane. I was equally as scared of that truck as I was of the pig! 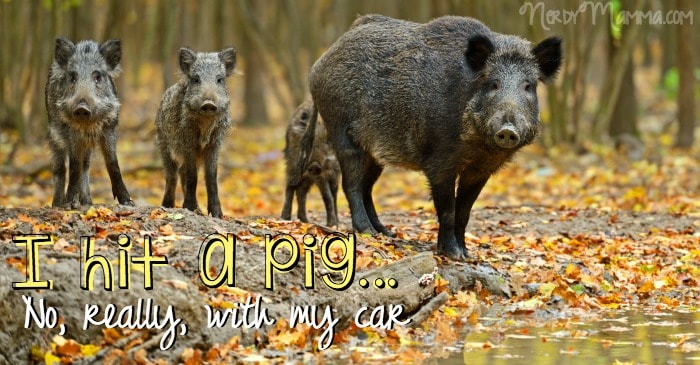 I tried really hard not to come in contact with that porky creature, but my Explorer and I weren’t quite agile enough. Hitting the brakes and swerving to the right, I clipped the bacon bottom of that monstrous ham with my left front fender. The brief contact with Mr. Piggy felt like we had hit a brick wall! My fear at that point was that the pig would be slung against the concrete wall and bounce back underneath the Explorer. Thank goodness that didn’t happen!

But, I had pulled over and slowed down in front of an 18-wheeler that was traveling 75 miles an hour. All I had to do at that point was get lined out on the highway again, and make sure that trucker didn’t clip MY bacon bottom! Fortunately, I was able to get out of the way of the truck and Hubby was able to talk me into pulling over after about 10 miles. Up to that point, my heart was racing, and I was sure that hyperventilation was next on the list of experiences for that evening.

I just kept thinking about what would have happened if we had been even one second slower getting to that point in the highway. Or, what if the pig had walked a little slower. We would have it that stupid pig broad-side. There would not have been anything I could have done to prevent the impact. In short, not only would the pig be dead, but most likely, Hubby and I would also be dead.

Amazingly enough, we only had minor damage to our Explorer (and my heart). After driving on down the Interstate for a few miles, Hubby started trying to distract me from our near-death experience. He took out his trusty cell phone and provided me with some statics on pig hunting with a motorized vehicle. (Actually, I think the pigs are hunting the people!)

According to Front Porch News Texas, regarding pig and auto accidents, “No state agency keeps statistics on these accidents, but using numbers from other studies Higginbotham has guessed 10,000 collisions with pigs in Texas a year.”

So, the moral of this story is: BE CAREFUL driving at night on Texas roads! Those pigs are pesky little devils and can do a lot of damage!