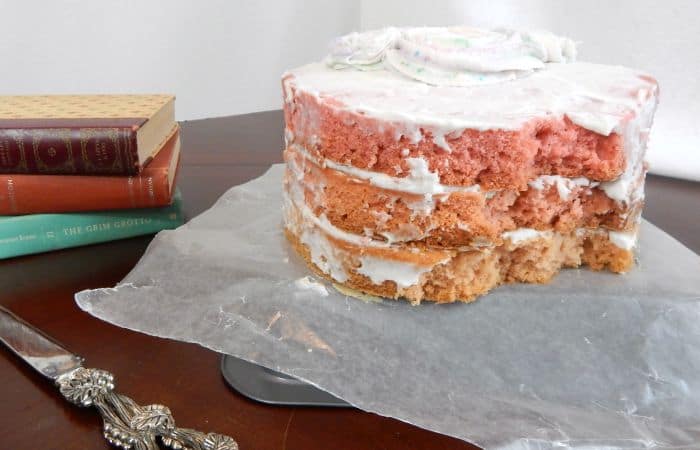 I was going to write this awesome recipe for a great cake. All pretty and ombre from a soft beige up to a deep pink. Three layers to make this gorgeous color combo. And that cake was going to be the cake for my daughter’s upcoming birthday. But then, silly me, I left it on the counter to cool. In three ziplock baggies. And when I came downstairs right before bedtime, I noticed huge pieces missing from each layer. EACH LAYER. This is the tragic story of the Vegan Vintage Ombre Cake That Wasn’t.

The story of the Vegan Vintage Ombre Cake That Wasn’t.

I spent three hours last Friday just baking this cake. See, a normal person would only take about an hour to bake all three layers, but I have a toddler and an infant, so I have to stop every 10 minutes or so and pick someone up and cuddle them. Or sooner than that even. So, three hours. As soon as they came out of the oven, I did everything right. I got them cooling on a rack and then, when they were cool enough, I put them in separate ziplock baggies, in preparation for putting them in the freezer overnight. My plan was to put the icing on them first thing in the morning, take my bloggy-pictures, tell everyone on the planet how cool this cake was, then put it in the freezer so it could hang-out until my daughter’s birthday this weekend. Like killing two birds with one stone, I really thought I was doing some smart stuff.

Like every evening, my husband and I headed upstairs with my baby girls to get them ready for bed while my son stayed downstairs to watch TV (he’s 13, so he insists that he should be allowed to stay-up later than the 2 year old). I heard my son go to bed a little while later, so I thought everything was cool. We got the girls in bed and I trotted downstairs to get a drink and put my little cake layers in the freezer.

And then the pleasant cake story took a terrible turn…

My perfect little cakes were still in their ziplock baggies. But now there were HUGE chunks missing. From every layer. Yup. A fork had been gouged into the side of each layer, one more so than the others; the next a little more; and less from the last. It was a macabre version of the three bears (this one’s not quite right; this one is a little better, but still not great; THIS one is perfect–so I’ll eat 3 times as much from it!).

I knew who the culprit was right away. My husband would never do such a thing (he has taken to asking me before he eats anything in the house: “is this something you need to photograph?”), my daughters are too little and the dogs can’t get on the counter. My son. It’s ALWAYS my son. (And, unfortunately, I get exactly why he does crap like this.)

And because I get why he does this kind of crap, I couldn’t confront him. When my daughters are 13, they’ll be yelled at, denied the cake, privileges taken away. Whatever I have to do to impress upon them that they don’t do crap like that. But my son gets a pass. He always gets a pass. Because if I had confronted him, treated him like a “normal” kid, he would have thrown things at me, cursed, screamed and, very likely, turned violent on me. And my daughters would have had to hear it all.

So, he gets a pass. I get to cry silently for just a second as I write this. Not for the single cake. No, more for him. And the lessons he’s not learning because he’s too mean to let me parent him. For the lessons that my daughters will learn–hit mom and you can get away with anything. I cry because I can’t do anything else. My hands are tied. I live like this every day.

My husband did talk to my son the next morning and, at my husband’s prompting, I got a very snarky “sorry”. But it doesn’t make it better. If he thought the cake was for eating, he would have cut a slice out rather than just digging-in with a fork. He knew. And he was just being mean, rude and kind of a shit. Part of me hates him for behaving like this. But I really do understand. I just don’t want to have to.

So, I went ahead and half-way decorated the cake. I loved the roses I did on the little tea party cake I did a couple of weeks ago, so I duplicated those a little in white with some funfetti. I made a “naked” cake, something I wouldn’t have done before, so you can see the eaten portions. Good bye, pretty cake. I’ll do something else for my daughter’s second birthday. And I’ll put it away faster so my son doesn’t get it before I can take a photo and serve it. 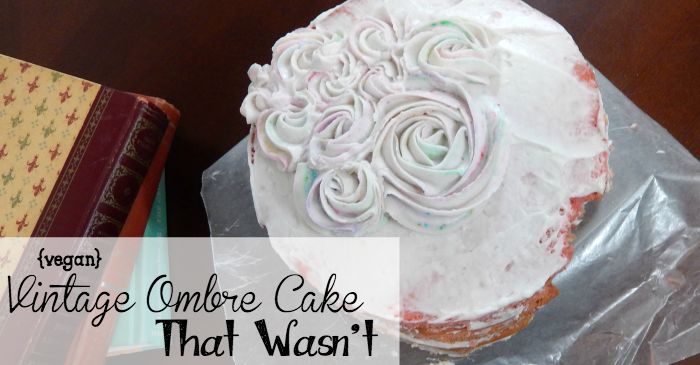