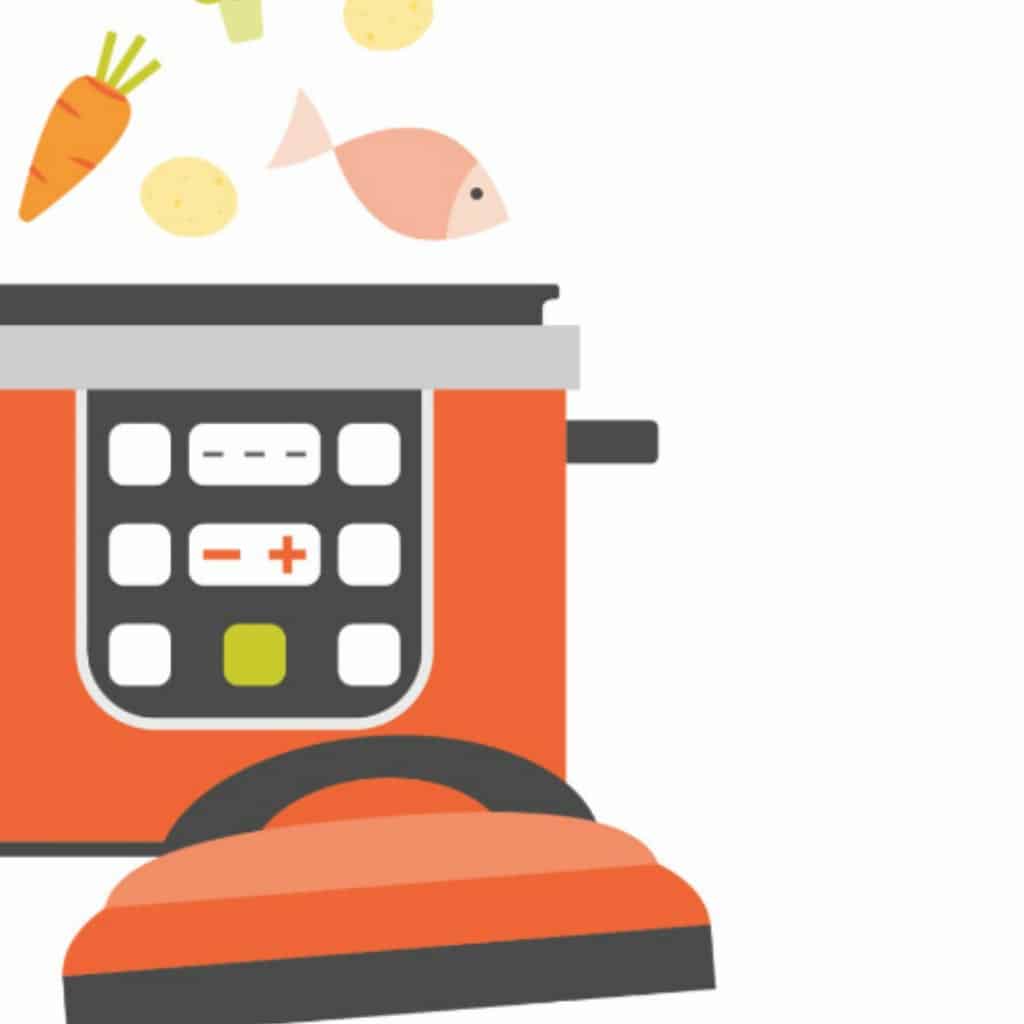 (Inside: I’m not going to lie: The Instant Pot scared me for a long time simply because I didn’t understand it. But now, I know the pot like my favorite spatula…and I even know all the intricacies of the Instant Pot Natural Release vs. Quick Release. I feel like an IP boss.)

So, for the longest time, I had no idea what was going on with the Instant Pot–I literally didn’t even know why I did what I did when I followed a friend’s recipe for meatloaf the first half-dozen times I used it.

But, after about half a year and a lot of teaching from my mom (who really should have told me she’d cooked with a pressure cooker as a kid?!), I now feel like I have a handle on it.

So much of a handle on it that I can tell you all about the Instant Pot Natural Release vs. Quick Release. 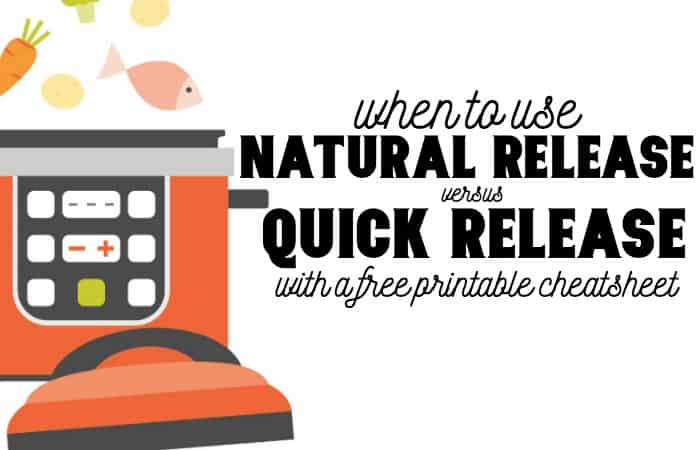 What Is Natural Release vs. Quick Release

This is where you allow the Instant Pot to beep, then it goes through a natural process of allowing the pressure inside to dissipate simply by not having more heat build-up.

It can take 20-30 mintues to naturally release all the pressure, depending on what you have in your Instant Pot cooking.

Your pot will actually beep again when the pressure is all gone and it’s safe to open the lid.

When you do this, it’s going to send steam and heat and wet and whatever foamy stuff your pot built-up into the air through that valve.

It can take less than 2 minutes to release all the pressure.

But, it can also be messy or mess-up your meat…so just be aware before you start a-toggling.

You will be able to open the lid when all the pressure is released and no more stuff is flying out the valve.

When to Use Natural Release vs. Quick Release

So, meat is a funny thing.

When you cook meat, it’s best if you let it “rest” after cooking.

You do this with meat when you grill it–you’re supposed to do it when you pull it out of the oven (although my mom just called it “letting it cool off.”

And Natural Release allows your meat to rest following the strenuous cooking that just changed the molecules of meat…which is basically what cooking is. I freaking love kitchen science.

So, if you’ve got a large chunk of meat that’s going to retain some toughness if it doesn’t rest, particularly beef, like a roast or prime rib–both of which are amazing in the instant pot, then Natural Release it is.

But chicken and pork–which tend to be smaller, thinner cuts and thus the likelihood of toughness tends to be less, then you can risk a quick release if you’re in a hurry, although I’d recommend the halfsie trick, below, if you can do it.

You know how oatmeal kind of expands and makes itself bigger in the microwave?

Know how beans make that crazy big foam when you cook them on the stovetop?

Yeah, those things are happening in the instant pot.

Cooking with pressure is still cooking, after all.

So, you don’t want to Quick Release with that–you’ll end up with what a lot of people call an “explosion.”

This doesn’t mean the lid of you pot is going to blow off and do crazy things–what it means is all that foam is going to try to escape through your release valve.

So, unless you want to be cleaning foam off the ceiling or oatmeal off the walls, stick with Natural Release.

You can try the halfsie release, but with mess, I don’t mess around.

I would just rather not–and then be super happy when I’m not scrubbing my ceiling (I do that enough already with two toddlers).

If you’re making vegetables, you don’t want them to be overcooked (unless you hate the people you’re serving them to, but that’s a different story).

Now, if you’re trying to cook veggies and meat at the same time, I recommend starting your meat, cooking it until about 5 mintues are left on the cook time, then Quick Release, pop the veggies in, then set the time to cook for the remaining 5 minutes or so, then Natural Release.

Unless you’re cooking a roast with potatoes, carrots, onions, and mushrooms–then I say throw those baddies in with the roast and let ’em be a little mushy–that’s the best roast ever.

Don’t deviate from a recipe, if you can help it.

Often whoever wrote the recipe chose Natural Release vs. Quick Release for a reason.

But, this is what I’m going to tell you–every Instant Pot is different.

Heck, every cut of meat is different.

So, you have to be the judge.

If your pot is just the shiznit and never needs a full-length natural release, you do you and quick release that stuff every time (except with the messy stuff–trust me on that one).

But, if you’re just learning–get your recipe on and listen to those folks that have gone before (basically learn from their experience).

You can have the best of both worlds.

The Instant Pot is magic. Trust me.

You can have a big cut of meat and let it rest under natural release for 10 minutes, then do a quick release and never notice a difference between the tenderness of the meat vs. having let the same cut go through a full natural release.

The same goes with all your other foods (except maybe not the messy foamy stuff–because that mess…eeew.)

If you need some extra time–just natural release for 10 minutes, then toggle your valve, let the rest of the pressure off and bam…you’re ready to plate.

Feel a little more confident with the Instant Pot Natural Release vs. Quick Release? Good. Should be–I just basically dumped about half a year’s worth of learning right there…

Alright, now go ahead and pin this awesome goodness giving you a little insight on the Instant Pot Natural Release vs. Quick Release methods–because you know you’re going to want it later. 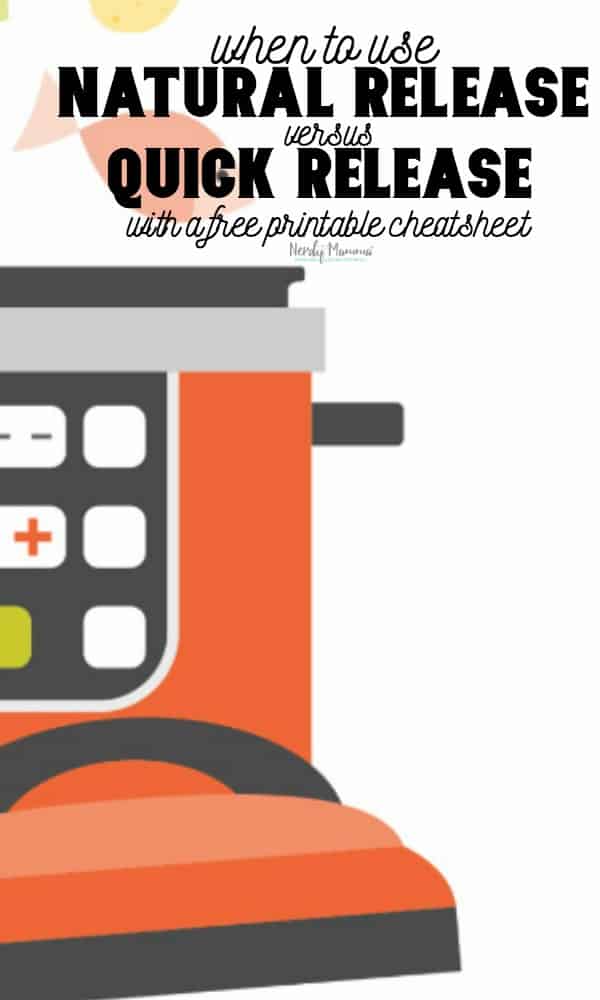 Noooooow you can grab your free printable pressure release cheatsheet for the Instant Pot here! 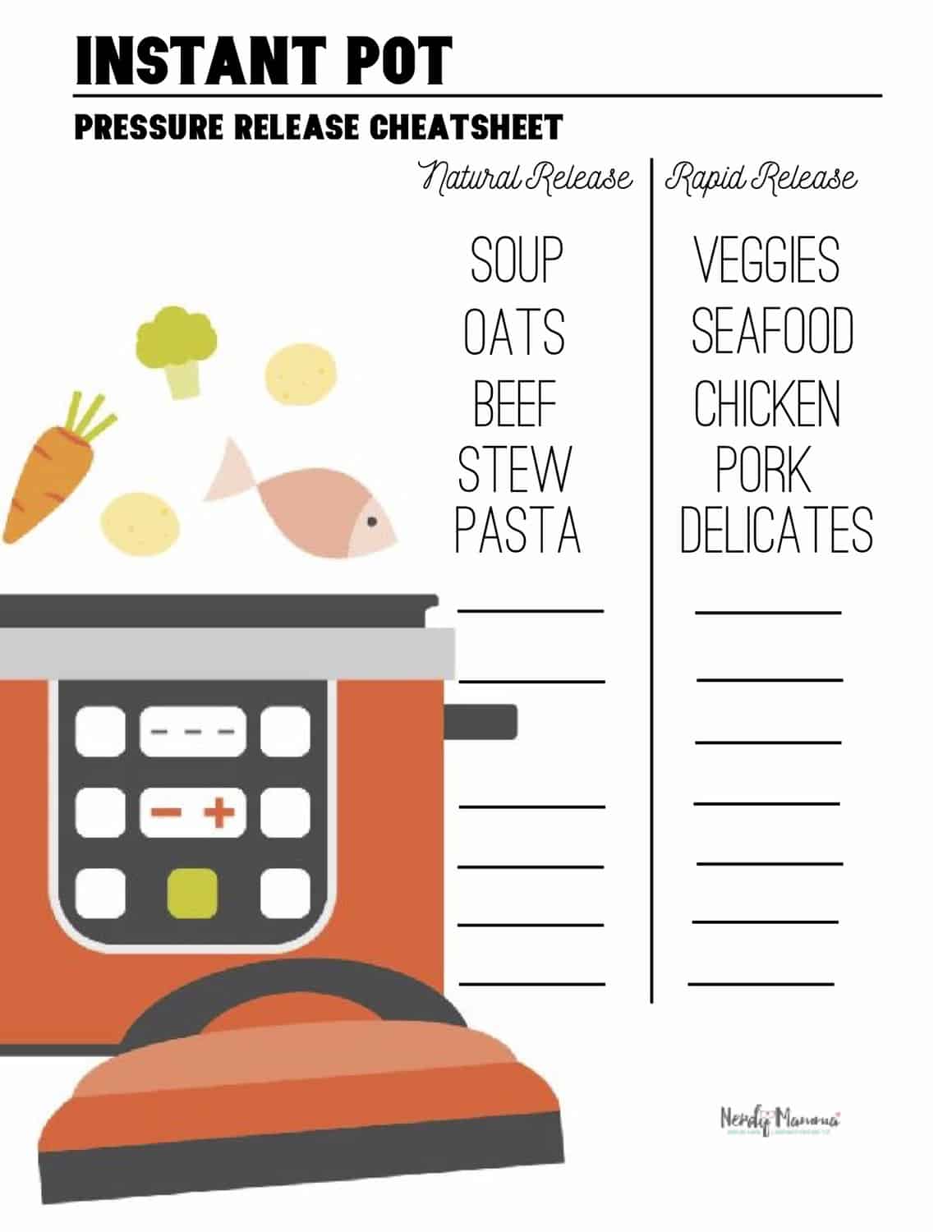