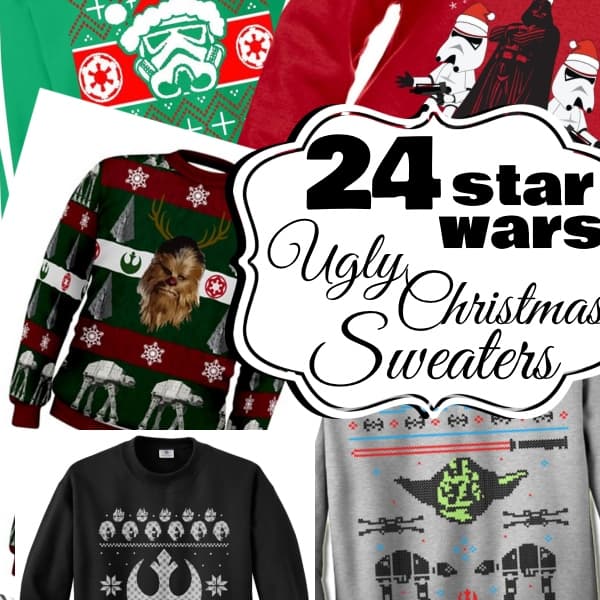 I have a confession to make (this blog is a lot about confessions…unfortunately), I love Star Wars.

Not like “oh, it’s fun and I’d watch that” but like “I’m thinking of installing a life-size Han-in-Carbonite in my living room” kind of love.

It’s obnoxious, I know. But it’s basically one of those “I’ve tried to quit it and I can’t” kind of things.

But let’s not kid ourselves, we’re living.

And if you’ve read this far, you’re ready for the next step in living that Star Wars life.

You’re ready to combine holidays with your love of Star Wars.

Friends, these are 24 Star Wars Ugly Christmas Sweaters that are EPIC and OUTRAGEOUS.

And I also love caps. 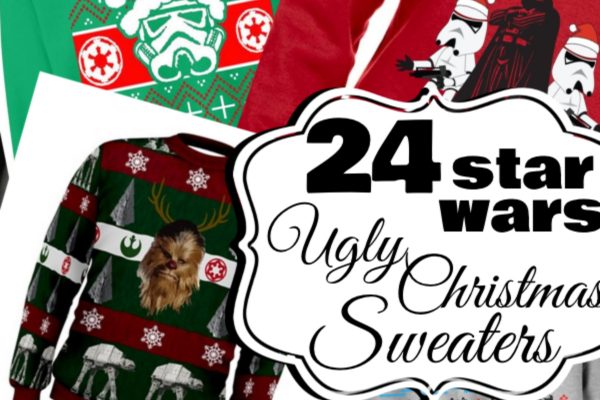 Although, conversely from what I previously thought, you might be here for a gift for someone else.

You can rest assured that the person in your life that loves Star Wars so much that they’re proud to sport the villains and heroes on their chest–they’ll LOVE whichever of these light-saber-littered sweatshirt/t-shirts that you get them from this collection of Star Wars Ugly Christmas Sweaters. 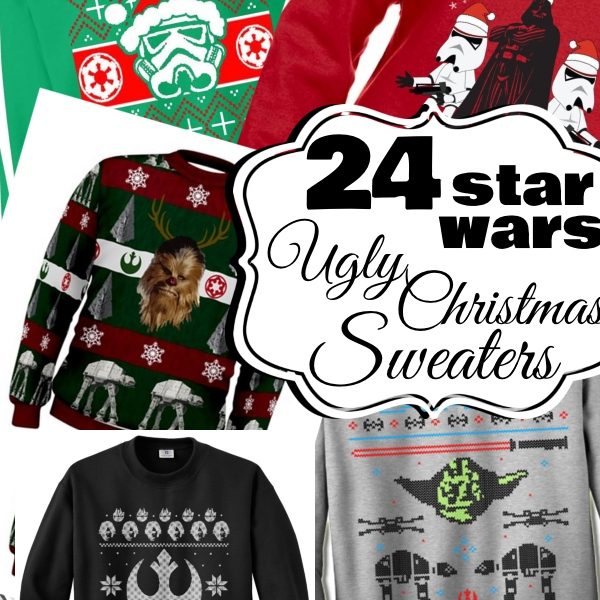 Look, Darth has no cheer. But that doesn’t mean he doesn’t find YOUR lack of cheer to be a major threat to the Empire…

All of the filthy rebel scum in your family will be touched and proud when you wear this to Christmas morning breakfast–and when they find out that you’ve gifted them the same shirt?! Priceless rebellion.

Still Not Cheerful there, Darth

No, he REALLY doesn’t find your lack of cheer to be acceptable. Get your sh*t together. Also, buy the dang shirt. It’s hilarious.

One Bad A** Posse

They’re the meanest gang in the galaxy. They’ll pew pew you and maybe even hit you. And this sweater–they’ll probably miss it too.

So much good here

This Star Wars Ugly Christmas Sweater is filled with so much good..the force is swaying to the light…

Truer Words Have Never been said

I’ll be honest, this is an awesome shirt. And it’s calling you to every holiday party ever.

You don’t get any more epic than a New Hope. And this scene from Tatooine–that is what Star Wars Ugly Christmas Sweaters are made of.

Smells Worse on the Inside

This Tauntaun Star Wars Ugly Christmas Sweater is, for all intents and purposes, the ultimate. It’s got reindeer, x-fighters and it smells worse on the inside. What could be more Star Wars-ish?!

On Dasher, on Dancer, on Prancer and B-184. On Comet, and Q-386. This At-At scene is the bomb–and probably the Star Wars Ugly Christmas Sweater I’ll end up with!

Black and White Dark Side

Look, everything here is evil. So let’s just revel in it. It’s all on the Dark Side, if you think about it.

First, Chewbacca does not look amused. But second, HOW CAN YOU NOT LOVE THIS?! It’s like the most star destroyers ever–and Chewie with some reindeer horns. Epic.

I get it, BB-8 was not on Hoth, but shut up and just enjoy this ridiculousness. SO much fun.

No, He’s Really NOt Impressed

For real. Darth is not impressed. Get your cheer on or he’s going to have to get dramatic.

Seriously, I dig this Star Wars Ugly Christmas Sweater because it’s understated–and actually not very ugly. But that means maybe it shouldn’t be on this list…poop.

Yeah, I’m not even 100% certain what in the world is all going on here. But there’re PORGs and CRYSTAL FOXES! And At-Ats and Storm Troopers. ANd Light Sabers. I’m in awe.

“Uh…aren’t you a little thin to be a Santa Clause.” – Princess Leia, cut scene in New Hope when the presents are delivered to prisoners.

Jolly Times Ahead There Are

You only get one chance, an impression to make. So wear the silliest sweater, you will, because amuse your family, you must.

She’s a Princess of a destroyed planet, a General in the Rebellion, and the matriarch of a clearly broken family (WTF turns their kid into a Darth-Vader lover?!). But she wants the force to be with you. See? Her heart’s in the right place.

I seriously love all the robots in Star Wars. So it totally makes sense to me that a Star Wars Ugly Christmas Sweater should be rife with robots.

Simple. And kind of silly. It’s a Game of Thrones crossover that I can’t resist.

Pop of Color–pop of Force

What a powerfully fun pop of color on this pop of force Star Wars Ugly Christmas Sweater.

Who ever heard of the Empire recruiting through clothing?! Oh, well, even if its a first, it’s still a classic.

This is such an epic Star Wars Ugly Christmas Sweater. But what’s up with the hand? I mean, it’s random…

Alright. Now that you made it all the way through the list of all 24 Star Wars Ugly Christmas Sweaters, be sure to pin it–that way you can snag another one next year…or next week. 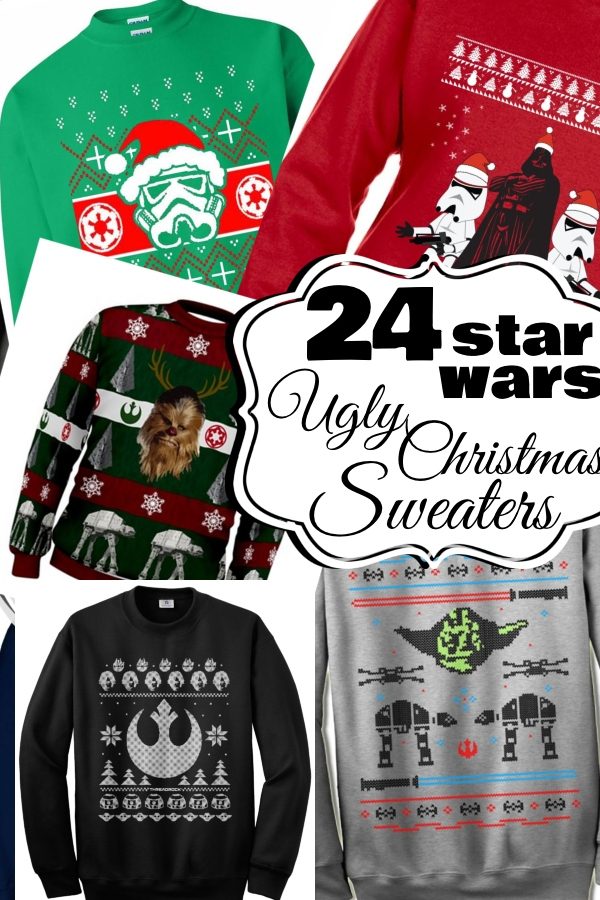